Our final project was a self directed project, basically we could do whatever we wanted. I decided to design a bookshop logo along with other branded items. This was because out of all the projects we did over the year. I found the corporate identity ones to be most enjoyable. Also books.

One thing I really wanted to learn from this project was if bookshops really needed a book in their logo. Almost all independent bookshops have some sort of book or page motif. But when you look at the larger bookshops (Waterstones, Foyles, Borders etc) they don’t. These larger bookshops don’t have a logo at all.

Their ‘logo’ is just the name (the proper technical term is a workmark). Now the interesting thing I want to know is it because those names are so well known they don’t need a logo to show what type of shop it is, or are books in logos a really cliched thing to have. I don’t know and I’ve probably spent way too much time thinking about this.

The brief for this project (which I wrote myself) was to create a bookshop logo and other branding for a shop specialising in science-fiction and fantasy books. I decided the shop would be called The Martian Chronicles (hope Ray Bradbury is okay with that). I decided it was going to be a Forbidden Planet type place but with more books.

So I started out this project by doing some research, and when I say research I mean I walked around Waterstones for a while. This was mostly just to look at the branding in store and any interesting little bits I could make so my bookshop would feel more like a bookshop. One thing I found from this is that everything is very handmade. As you can probably see the window displays are full of handwritten signs and recycled book pages. Most of the signage in store is handwritten, they even had a display for Me Before You complete with a box of tissues.

One thing I found while researching is that James Daunt who took over Waterstones in 2011 gave each store more freeway in what they stock and how they decorate. This means that while you have some official Waterstones branding you also have displays that are made by the people working in the shop.

After that I did more research on the computer. I looked at various bookshop logos and how they were displayed in store. I was also really lucky to come across a blog post from venturethree who did Waterstones ‘Feel Every Word‘ campaign from a few years ago and they had lots of images from that. It’s really interesting, Waterstones have since rebranded again but you can still go into stores and find posters from that old campaign (at least there are still ones up at the shop in Glasgow).

One thing I knew very on was that this bookshop logo would have something to do with space. I mean it’s a shop selling sci-fi books and it’s named after a sci-fi book so there had to be some sort of space age imagery in the logo. So I looked at Atomic Age Design.

This was a design movement from the 40s and 50s and was heavily inspired by the Cold War and the space race. The imagery was heavily influenced by scientific discoveries of the time, it featured geometric atomic particles, skeletal shapes because of the more widespread use of x-rays and organic shapes similar to what cells would look like under the microscope.

The Atomic Age is something I’ve been fascinated with for a long time, I always associate it with Tomorrowland from the Disney parks. It’s an idea of what the future might look like from an earlier era.

Logo design is fun because it’s mostly just doodling shapes. I spent a day drawing space stuff and by the end of it had a few shapes I liked enough to take onto the computer. The orbit doodles were interesting but not recognisable so I eventually went with my little alien space ship. It was one of the first things I drew and I’m still a little in love with it.

Normally I would use the Image Trace function in Illustrator to turn my drawing into a vector but I wanted this bookshop logo to be more professional (a hand drawn logo might give the idea of a more ‘fun’ shop). Not that the shop wouldn’t be fun, but to me science gives the idea of modern straight edges and that was something I wanted to get over through the logo. So I used my drawing as a basis and recreated it in Illustrator making sure it was even and symmetrical. 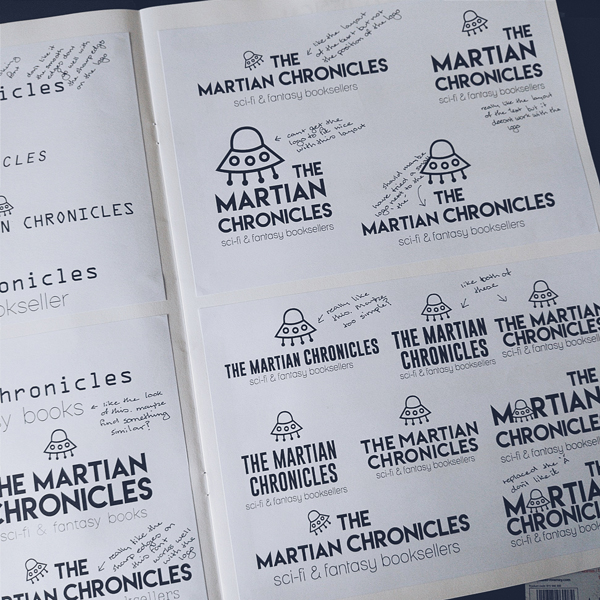 Finding a nice font and layout with the text and logo took a long time. Being a student makes it really difficult to find a nice font. Because you really don’t want to go buying any fonts. So you’re limited to the fonts already in Illustrator or whatever you can find for free. You can get really nice fonts for free. The problem is finding them among the many many thousands of other fonts. Copyright is always an issue as well. Not so much for this as it won’t be used commercially, but it’s still something you need to think about.

Just an interesting little aside here. One font I tried to use was called Lemon/ Milk. It’s a nice font which you can get it for free on DaFont. I’ve used it in a couple of projects. But when I tried it for this logo something didn’t look right. I couldn’t work out what it was. Then I realised this font looked similar to the font used in Star Trek Voyager. As soon as I realised that I knew I couldn’t use it. Even though I loved the font it didn’t look right because my brain associated it with Star Trek.

I was really happy with my final bookshop logo. It’s a little alien space ship. It’s cute. And it’s immediately recognisable as an alien space ship. I like the fonts I used. It looks better with a thin font to contrast with the thick lines in the logo.

The only thing I wonder about is should the shop really be *The* Martian Chronicles. I don’t know of many shops that start with ‘The‘. But then again the name of the shop is secondary to designing the logo. The reason I had to pick a name is it gives you an idea of what the shop is like. Which then goes on to influence the overall design of the branding.

Continue on to part two where I show how I applied my finished logo to various medias.